A project of Lapham’s Quarterly.

What makes a book a best seller? Why are some best sellers forgotten?

Best sellers offer a window into the thoughts and habits of the cultures that consumed them, and when they remain popular they act as a bridge between the present and the past, creating an imagined community of readers who have been on the same reading journey and who share a set of interests or ideas.

But many books that once reached a wide audience are no longer read today. These forgotten best sellers can show us the ways in which the world has changed, offering a glimpse into what makes us different from the readers of the past—how our world is distinct from theirs, how tastes and habits have altered, how publishing practices have shifted. These books, often out-of-print and available mainly on sites like Project Gutenberg and in used bookstores, present a unique vantage from which to observe the reading habits of a particular moment.

Harriet Beecher Stowe’s 1852 novel Uncle Tom’s Cabin was the best-selling novel of the nineteenth century. It spawned translations, sequels, stage versions, parodies, and homages, and it continues to be read, remembered, and interrogated. Before Stowe published her book, the best-selling novel in the United States was Susana Rowson’s Charlotte Temple (1794), a book nowhere near as well remembered despite the fact that it appeared in over two hundred editions and remained popular for more than a hundred years. For decades, it inspired pilgrimages to the graveyard behind Trinity Church in New York, where a gravestone for the fictional protagonist can be found. (Today’s pilgrims are much more likely to be looking for Alexander Hamilton, buried in another part of the churchyard.) Books that were once popular but now forgotten wind up excluded from the canon of “classic” literature. Many of these books were written by women and people of color. Charlotte Temple fell out of favor after World War I, as tastes changed and literary scholars turned away from popular literature to books that were often decidedly unpopular when first published, like Moby Dick. 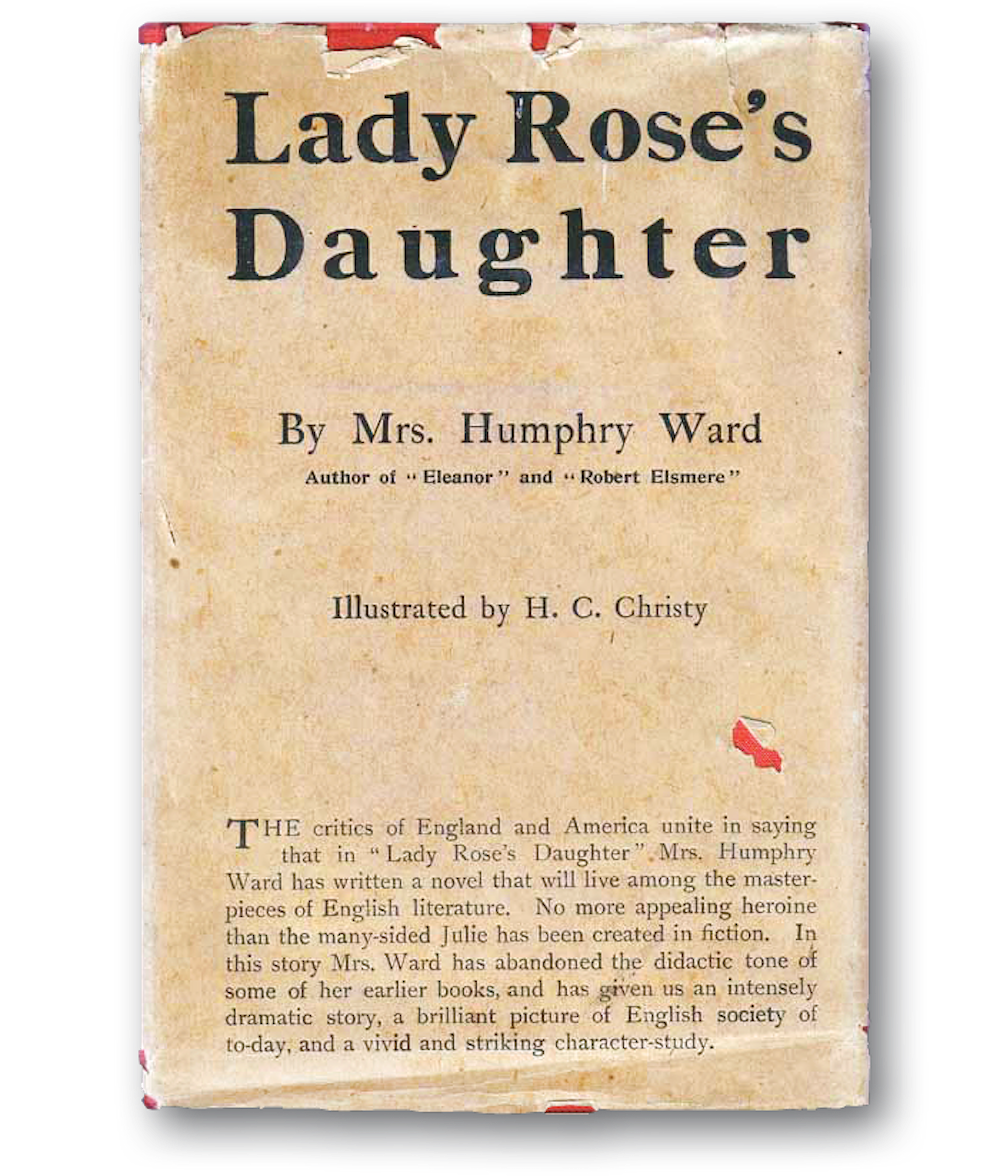 To make an intimate study of what we can learn from forgotten bestsellers, we have selected a best-selling novel that is today almost never read or discussed: Mary Augusta Ward’s Lady Rose’s Daughter. We are publishing a new digital edition of the novel, the best-selling book of 1903 in the United States, accompanied by annotations, contemporary reviews, and other responses to the text.

Mary Ward, a British writer who published under her married name, Mrs. Humphry Ward, was one of the most popular English-language novelists of the turn of the twentieth century. Between 1881 and 1920 she published twenty-six novels, many of them best sellers. But by the 1920s many of her novels, even those that had been remarkably popular, had fallen out of print. Today she is rarely read outside academic circles. Lady Rose’s Daughter, a society romance about illegitimacy, betrayal, and the role of women in society, captured the imaginations of many readers when it was first published. By reading it today, we can both enjoy a good story for its own sake and try to understand what compelled so many people to pay a hard-earned $1.50 for the chance to spend some time in the fictional world Ward created.

We invite readers to discuss Lady Rose’s Daughter on social media using the hashtag #LadyRoseLQ and to join our reading group, where you can use annotation and comment features to discuss the novel. To join us you must first create an account here by selecting “Need to sign up?” After creating an account you can connect to the discussion by following this link. You can also create your own reading group for your friends, book club, or class. (Details on how to do that can be found here.)

We are publishing a series of essays that challenge our common conceptions of popular literature by exploring diverse works from past best-seller lists—we’ll even delve into how those lists were compiled in the first place. These essays address topics from the first modern best seller in Russia to Edith Wharton’s disdain for best sellers, despite being a best-selling novelist herself. We’ll also publish an essay on the prehistory of romance novels and an examination of antislavery mass media, as well as infographics that explore the broader history of printing and book publishing. Our aim is to provide new insights into the cultures that produced and read popular works. Why have some books proved timeless while others seem to have resonated, albeit strongly, only with the readers of their moment?

Please return to this page for updates about this series. If you have questions or comments, we’d love to hear from you at editorial@laphamsquarterly.org.